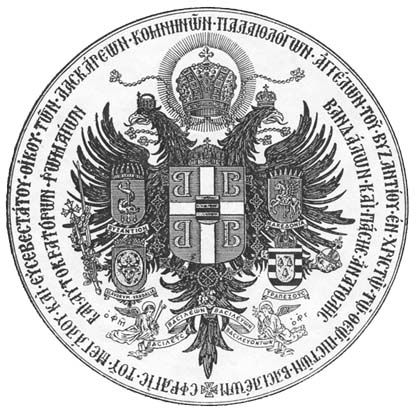 THE GREAT SEAL
OF
THE LASCARIS COMNENUS

IT IS a certainty that the first to use the BICEPHALOUS EAGLE [Two-Headed Eagle] were the LASCARIS EMPERORS who adopted it as their Emblem from a figure hewn out of the stone wall of a Hittite fortress in Asia Minor.

The origin of all the Imperial Bicephalous Eagles is Byzantium, the Second Rome.  The Bicephalous Eagle was the property of the HOUSE OF LASCARIS who conveyed it to the Byzantine Empire and it is distinct from the anterior Augustan Eagle of the Roman Empire, the First Rome.  It was introduced into Russia, the Third Rome, as a dowry on the occasion of the marriage of Sophia Palaeologos to Ivan III the Great, Grand Duke of Muscovy.

Following the demise of Communism, the Bicephalous Eagle re-appeared as a Symbol of the Russian State.  Nevertheless, it has independently endured the test of time by its constant presence at the ancient Monasteries of Mount Athos, and has emerged in The Americas, the Fourth Rome or NEW BYZANTIUM.

Emanating from The HOUSE are:

The  ORDERS  &  other INSTITUTIONS

Each ORDER accountable to a:
MAGISTERIAL  GRAND  COUNCIL
____
__

ADMINISTRATIVE  FRAMEWORK
OF  THE  ORDERS

A  BRIEF  HISTORICAL  OVERVIEW
OF  THE
INFLUENCE OF BYZANTIUM

Trebizond fares better and remains in power until 1461  when  it too  falls to the same invading force.

There was also the cultural city of Mystras, capital of the Despotate of like name, nestled on the first slopes of Mt. Taygetos and adjacent to Sparta.  It lasted from 1348 to 1460 when it too succumbed to the Turk.   The aggregate of all these final events marks the true Fall of the Roman Empire—yet,  only in a geopolitical sense and  not ever in a socio-cultural sense.  Witness the enduring Western Civilization,.

The front line defense of the Western world thus fails and the Asiatic non-Christian presence comes face to face with Europe at a crucial geographical juncture.  This problematic actuality casts long shadows on dubious alliances attempted by Westerners with non-Europeans in that area.

The escape from Byzantium to the West of a large number of intellectual and cultivated people brings about the Renaissance of Europe.  An expanding consequence of that, in Western terms, is the Discovery of the Americas which establishes the inevitable reality that the New World is NEW BYZANTIUM. 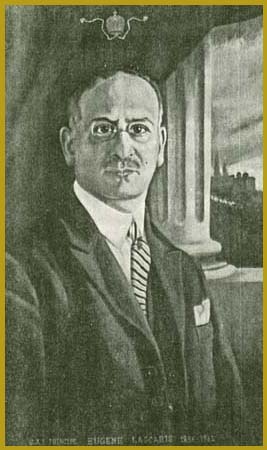 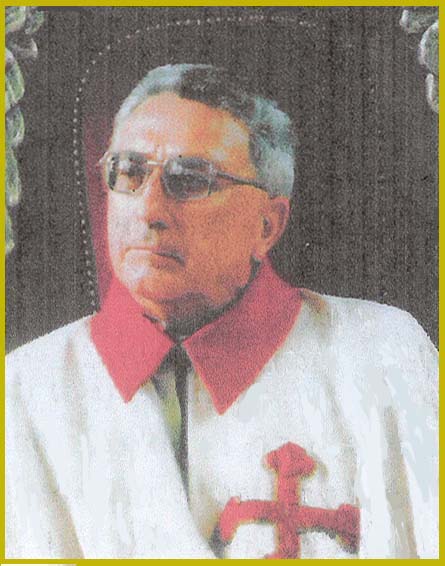 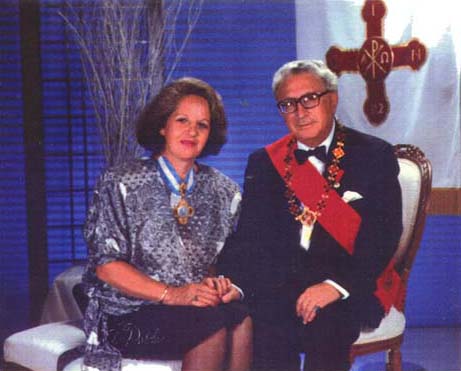 HIS IMPERIAL AND ROYAL HIGHNESS PRINCE THEODORE IX LASCARIS COMNENUS of the Byzantine House of Constantinople with PRINCESS GABRIELA reside with the Family in Venezuela.  Prince Theodore IX was by Primogeniture the HIGH PROTECTOR of the House and all of its Institutions.  These include the UNION OF BYZANTINE ARISTOCRACY; the ORDER OF SAINTS CONSTANTINE THE GREAT AND HELEN; the ORDER OF SAINT EUGENE OF TREBIZOND; and the INTERNATIONAL PHILO-BYZANTINE ACADEMY AND UNIVERSITY (IPHBAU).  He was the GRAND MASTER of the Constantinian Helenian Order, while his younger brother, H. I. AND R. H. PRINCE   JUAN   ARCADIO  LASCARIS    COMNENUS    is   the GRAND MASTER of the Eugenian Order.

Prince Theodore IX was a Doctor of Laws and Philosophy; University Professor at national and foreign educational institutions [in the U.S.A. at Notre Dame University, South Bend, IN]; critic; author; essayist; writer of an acknowledged and far reaching trajectory; co-worker for international publications in the country; had conducted conferences in various countries in the Continents of Europe and America; and had received decorations such as the Order of Miranda and others for his pedagogical work.  He received  Honorary  Doctorates at Universities in Canada, the United States of America, Argentina and France among others.

Among works published by the Prince are: The Problems and Teaching of the United Nations and of UNESCO; Introduction to Philosophy and Greek Philosophy; The Philosophies of Cultures and the Mass Societies; Historical Juridical Study of  the   Independent Orders  of Chivalry;  Philosophy of Venezuelan Education; Fifth Centenary: Encounters and Divergencies on the Half Millennium of Discovery of the New World.. 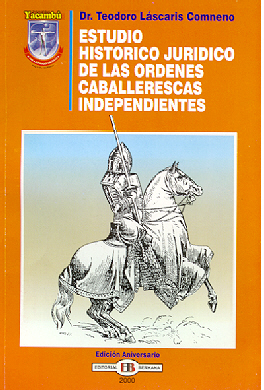 DECLARATORY  INTRODUCTION
ON  PROS  AND  CONS
OF  THE
LASCARIS  COMNENUS

By: Dr. Theodore Lascaris Comnenus.  Valencia, Venezuela, January 1, 1997.
Prior to the Spanish Civil War of 1936, a PRO-LASCARIS Committee established in Madrid advanced the candidacy of my father, Prince Eugene Lascaris, for the Crowns of Greece and Cyprus, particularly in the years 1923 and 1935.

In the post-World War II period, in 1946, he gave international character to the Greek-Byzantine Institution of the Sovereign (i.e., Independent) Order of Constantine the Great with its feminine branch of Saint Helen; and beginning in 1948, the Review PARTHENON was published -- an organ of the "Greek-Spanish Cultural Association" with its seat in Madrid.

In 1950, as a cultural extension of the Order, my father founded the "Philo -Byzantine Academy and University Magistrorum."

In 1953 in Madrid was created the institute and magazine CONTRA-LASCARIS presided by an ex-Falangist and ex-carlosoctavista named "Le petit Goebles," and his "ad-latere" an author, who through a publication "Hidalguía" presented themselves as implacable adversaries of Prince Eugene, of our Family, and of our Institutions.  Such a person wished to bring honor to his name by linking up with us who unfortunately are not sectarian integristas.

Rodríguez Maseda affirms that fanatics in their ignorance border on IDIOCY, being capable of the most incredible doings in word and in deed.

Those mentioned pertained to a group that in the fifties and sixties was led by a politico and his ministers, members of the sect integrista nocedaliana, protected by the totalitarian STATE.

The CONTRA-LASCARIS stem since '53 to date, developing a campaign based on contemptuous insults, denigration and attacks on prestige.  With ample financial support, they are dedicated to sending letters and pamphlets everywhere using their "executioners."

While the Lascaris Comnenus Institutions promote "Human Rights" and the "Declaration of Rights of the United Nations," of the OAS and of UNESCO, in favor of understanding, of the comprehension of fraternity, the integristas nocedalianos CONTRAS are enemies of the truth, of reason, and of liberty, by submitting to fanatical obscurantism, isolated from all logic.

As so wisely articulates the top advisor of President Clinton, George Stephanopoulos, when personal attacks are launched, it is a deliberate strategy intended not to debate the real problems.  Which in our case is the defense of Human Rights, the freedom of expression and union, as opposed to obscurantism.

More precisely, persecutions by word as well as by act is what gave strength to Christianity.  Only the PRO, or so to speak the POSITIVE produces thought and action.   CONTRA NEGATIVISM for its malignity is the DRAGON that will be annihilated by our master Megalomartyr Saint George of Cappadocia, renowned Captain of the PRO-LASCARIS OF BYZANTIUM. 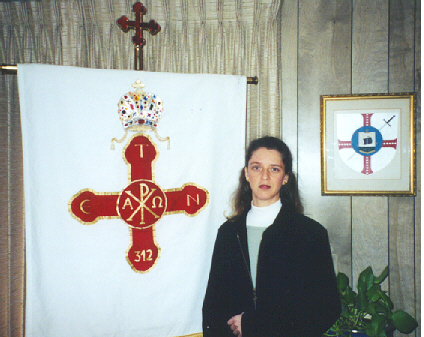 On October 16, 1935, in the residence of Ricla in Spain.
The Colonel Contopirakis Aide-de-camp of General Plastiras; the countess
of Castellano; the Princess Nicasia; the Prince Eugene; Mr. Melioudis, Deputy; the
Count of Castellano;  don Vicente Lope Onde and don Jose Orera de Ibarz.

(Above appear the Greek leaflet and the photograph including
members of the Greek Delegation dispatched to Prince Eugene II
Lascaris Comnenos in exile in Spain to accept as legitimate King the
throne of Greece as H.R.H. EUGENE A' KING OF THE HELLENES.)

NOTE:
The Greek people accept the term "King of the Hellenes"
and not "King of Greece."

They may consider to be "citizens" within royal governance;
yet will not accept to be "subjects" under royal authority.
(They consider their king to be one among them worldwide.) 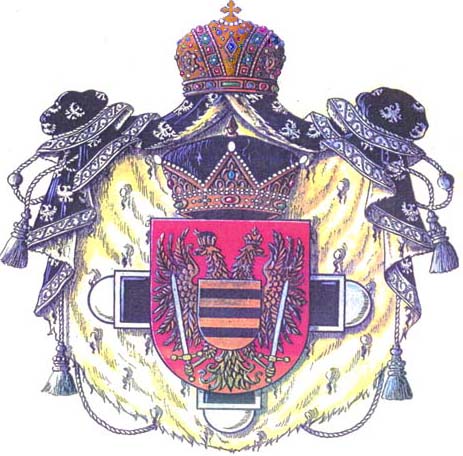 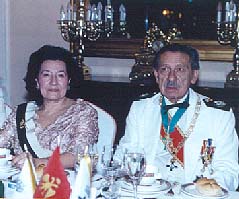 Juan Arcadio Lascaris Comneno (Ioannis Arkadios LASKARIS-KOMNENOS) was born in 1926 in Zaragoza, Spain.  He studied Sociology, Law and History and is Doctor of Social Sciences and Doctor of Civil Law.  He lived and worked in Spain, U.S.A. and in countries of Central and South America.


His written work is large and expands into areas such as Public Health and Care, Literature, History of Spain and of the Byzantine Empire.
He is the author of "Collection of Legislation on Health" in twenty-five volumes.  His works were published in 1988 on "Legislation on Personnel" 800 pages, and "Pharmaceutics" in two volumes in 1500 pages and in 1989 his work "Teaching and Research" 710 pages.
In the area of Social Care, the institution for Spain’s National Care has honored him with the Prize for his work "Alvaro Lopez Nuñez and Social Care in Spain."
His great Love for Greece, Byzantine civilization and Orthodoxy cannot escape anyone’s notice.
There is also a long list of intellectual institutions that have taken Ioannis Arkadios Laskaris Komnenos into their fold.
Many honorary distinctions and moral rewards have also been bestowed upon him during his half-century of contribution to the scientific environment.
A lover of ecclesiastical fine arts, he devotes his free time in Byzantine iconography.
He resides permanently in Madrid.  He is married to María Isabela de Monroy-Blanco and they have two daughters, María Eugenia and Helena.

ORDER OF SAINT EUGENE OF TREBIZOND


Appended to the Second Constitution Article 1.
In the event of my physical inability duly to attend to my functions as Grand Master or because of my demise, the said office will be assumed immediately by my first-born daughter, the Princess Dr. MARIA EUGENIA ISABEL LASCARIS COMNENUS  MONROY as Supreme Grand Dame of the same [ i.e., of the Order of Saint Eugene of Trebizond ].  Article 2.
My second daughter, the Princess Dr. HELENA ISABEL EIRENE LASCARIS COMNENUS MONROY, will at the same time assume the Lieutenancy General, thus fulfilling the condition established in Section b) of the Second Constitution. Article 3.
On such occasion when my successor to the Grand Magistery should be unable to continue in her post because of impossibility or death, said Grand Magistery will be assumed by my second daughter, the Princess Dr. Helena Isabel Eirene, who until that moment will have fulfilled the charge of the Lieutenancy General. Article 4.
In such circumstance when the latter were unable to assume the post or in the event of her demise, the Supreme Grand Master would be the eldest son of my first daughter, the Princess Dr. Maria Eugenia Isabel, if he would meet the following conditions,

a) Older than 18 years.
b)  Will have taken steps whereby the surname Lascaris would be incorporated in his name in the first place; which is to say, his descendants will always be able to be named Lascaris and will be able to continue as members of the House of Lascaris Comnenus.

Article 5.
Should such a male not exist, it would pass to the first-born male of my second daughter, Dr Helena Isabel Eirene, as long as he would fulfill the conditions indicated in Sections a) and b) of the previous Article. Article 6.
If none of these males existed it could pass to the daughters of both, following the same order and conditions. Article 7.
If none of both previously cited daughters had descendants, the succession to the Grand Magistery would be determined by the Grand Protector of the Order or Chief of the Imperial House of the Lascaris Comnenus.

Given in Madrid on the twenty-fourth of June of the year 2001 of the Birth of the Savior or 7509 of the Era of Constantinople.