Concerning Language — Hear it. Speak it. Read it. Write it.

Concerning Money — Make it. Lose it. Keep it. Grow it.


This is a goal that America will not tolerate
from any force or government: 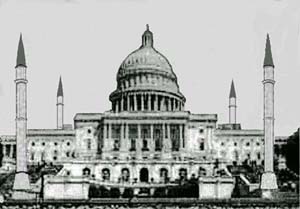 Did you know that the Capitol building in Washington, D.C. [as well as in many other cities in the U.S. and abroad, and also many mosques] was modeled after and inspired by the great Church of Hagia Sophia in Constantinople?

WHO HAS THE COURAGE?

It is not enough to hear sundry politicians—not statesmen—presidential hopefuls, ranting commentators, self-proclaimed pundits and experts as to how the economy is doing now or will do in the future. Reason dictates that had such knowledge been applied before, the situation would not have been as it is today. More should be known and more should be applied. The question that needs to be answered with precision and commitment is what exact steps will apply that will save the economy and the future of the Nation. Demagoguery has exceeded its limits.

A known fact is that the current condition (year 2012) is dismal, and that it will continue to be so and even become worse if repeated. On the other hand, no concrete plan has yet been solidified despite the mounting urgency. Empty words are useless tools.

The underlying problem will not be resolved by complaining about and manipulating the symptoms rather than dealing with the cause—a disingenuous and misleading activity. The United States reached its success because of several favorable circumstances, in addition to the unique form of government in its initial structure. It began with a public spirit of self-reliance by its early settlers, positive effort, and an unquenchable desire for freedom. Its geographic location spared it from major negative involvement with most of the world. This allowed enough time for society to organize, mature, and expand, and to culminate as a world power and leader after its participation in World Wars I and II. The combination of favorable events to a large degree has ended. Even the topography has now been neutralized by the dramatic advancement of technology on the earth’s surface and in space. The change has been swift and abrupt. And, it is for this reason that humanity’s mindset has expanded, making it easier to shift the focus toward a one-world government.

However, this notion of oneness embraces a profound fallacy. It contains an insidious implication of a dominated populace ruled by a central singular authority—that is, a world dictatorship. The fever of oneness is therefore one of the fundamental maladies that have begun once again to afflict humanity. This is at the expense, for example, of individuality or personal identity; of freedom of thought, speech, choice, mobility; of ownership and conveyance of property; of assurance of personal physical and mental safety; and of religious freedom and justice. Implementation of oneness imposes similarity of appearance (witness Mao Tse-tung uniforms), behavior, thought, and the eradication of diversity. Therefore, oneness is the sinister tool that debases the integrity of a free society. The method used is dual and resorts to the weaker nature of human beings: One is to incite greed (an economic issue); the other is to appeal to man’s humanity (a social issue). Social issues are garnered with humanitarian references and promises of utopian serenity and wealth allocations that secure lasting happiness and joy.

On the other hand, the economic aspect of oneness harbors its own concealed cancer that affects at the core the material needs of all human beings. This approach is insidious as well and destructive of the economic integrity of an evolved society. An unfettered accumulation of material wealth always leads to the ultimate concentration of power and control. This is achieved under the guise of free trade. The term is a misnomer for what it is supposed to stand for. That is, in an honest interpretation of what the term should mean, the correct label is fair trade. The latter means trading in a free manner with anyone, but in a way that is equitable and honorable on both sides—even when exercising the precept of laissez-faire. Free trade, therefore, unveils a clear weakness wherein under protection of the system those engaged in the activity are free to perform in any manner of their choice—either fair and honorable or unfair and dishonorable. This situation presents itself to the United States today.

Three pillars comprise the foundation of a civilized evolved society. That is to say, there are three basic elements that support the existence of an accomplished, independent, and preeminent society. These elements are agriculture & fishery, resource extraction, and industry. The absence of any one of the three elements forecloses on the ability to be such a society.  It is self-evident that without agriculture & fishery a society cannot be formed above the level of a small group or family unit dedicated to a struggle for basic and perilous survival. Resource extraction constitutes the next element that provides the many needs for the survival and welfare of humankind—including underground-surface-sea activity for energy and usage.  However, all these needs notwithstanding, a society would remain backward and to a degree uncivilized without the contribution of the third element: industry. This third supporting leg of the structure is what creates the wealth of a society. It is the function that transforms hidden wealth to evident and usable wealth that can be consumed by its creators or offered to others in exchange for yet additional needs.

The massive exodus of the industrial base of the United States on the pretext of global trade condemned this Nation to a state of abject mediocrity. The premise that competition should subject domestic industry to annihilation is tantamount to betrayal, when competition from abroad is practiced on unfair terms. In addition, such unfairness is even more reprehensible when practiced on the basis of near slave labor. To be sure, the excesses of organized labor in the US are in need of eradication. Nevertheless, the outlook should not be the lowering of the standard of living of the US population to the global level in order to accommodate the desired oneness cited above.

For those who agonize for free trade, it seems strange how they are anxious to subject American products to the fire of competition, while loathe to struggle with the same tenacity in keeping industry at home. They seem to be ignorant of the fact that a society with an industrial base is far more prosperous than one without. And, they seem to misunderstand that an impoverished and dependent society is a downward spiraling participant in a competitive trade setting. Fair trade is legitimate and best suited when dealing from a position of advantage. The immediate profit motive should not be the dominant factor in estimating a trade arrangement. The long run consideration should prevail. Therefore, it is imperative for the United Sates to recover its industrial preeminence and preserve the advantage of skill and technology.

Are those in positions of leadership in this Nation prepared to do this?

Marxism and Christianity are in diametric opposition:

Marxism is repressive and unnatural.

Christianity is liberating and natural.

Marxism dictates communal living and an artificial caring-love from the top down.

Christianity advocates communal living and caring-love from the individual up.

NEW BYZANTIUM is The AMERICAS
We are sincerely pleased you have come to visit our Site and we extend to you our warmest greeting in the highest tradition of BYZANTIUM.  Our Principal goal is to impart to you heretofore intentionally little known facts about BYZANTIUM as the foundation of Western Civilization.  We will avoid knowingly withholding the truth as an aim to social disorientation.  Practice of historical deception must cease.  We hope that you will enjoy our contribution to the fullest.  Welcome.
Constantine the Great began his eventful climb in York, England and reached the apex of his achievement in Constantinople, the City that he founded and named after himself (Constantine+Polis [city] =Constantinople).  By means of these pages, our readers travel through time, touching upon the early periods, including that of Constantine, of historical Constantinople, and of Hagia Sophia—the nexus of the Christian world—to arrive at places and events of our present day.  Our readers reach the outermost limit to which both Eastern and Western Christian groups expanded, bringing forth the flower of Western Civilization.  That limit is the Western Hemisphere as a whole, and in particular the coast of California near San Francisco and the Golden Gate Bridge where the two groups converged  as they approached from the North and from the South.